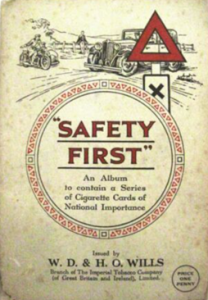 I recently got a call from my friend Kevin, who has a wide variety of evolving interests, often somewhat eclectic.  When we met for lunch, he pulled out his most recent purchase: a collection of 50 vintage cigarette cards published and distributed by the Imperial Tobacco Company in England around 1910.  According to Wikipedia, “between 1875 and the 1940s, cigarette companies often included collectible cards with their packages of cigarettes. Cigarette card sets document popular culture from the turn of the century, often depicting the period’s actresses, costumes, and sports, as well as offering insights into mainstream humour and cultural norms.”  Kind of like bubble gum baseball cards if you were of my era, except with a broader range of topics of current interest.

This particular set comprised an album entitled Safety First, and featured safety rules and tips for motorists at a time when rules were not at all well established.  I was intrigued with the cards and their purpose.  When automobiles started becoming popular in the early 1900’s, some huge changes came with them.  Many were wonderful: people could go farther, explore new places and generally expand their personal horizons.  Many were tragic: speeding, reckless driving, and lack of appreciation for the damage a fast, heavy piece of machinery could inflict resulted in sky-rocketing fatality rates.

Early thinking about this problem focused on driver behavior – unlike a horse, the car was an inert thing, totally in the control of the operator.  If something went wrong, it had to be the fault of the driver, right?  (Anything here sound familiar?)  It was only later when manufacturers started thinking about engineering controls.  Anyway, this led to many campaigns such as the one launched by the W.D. & H.G. Wills company designed to help address the growing problem.  Remembering that sources of information were far more limited at that time than now, this was a pretty creative way of achieving fairly wide distribution of safety tips.  Check out the examples below. 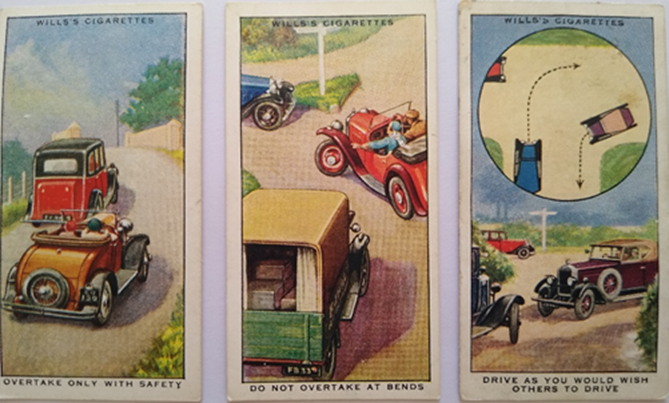 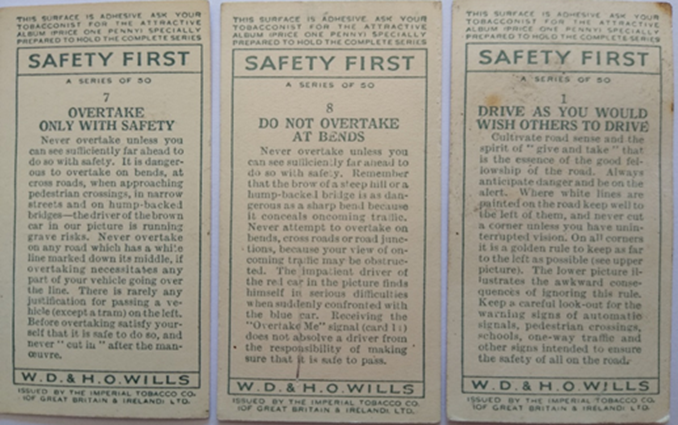 I found this historical approach to addressing an obvious safety concern as one step on the longer road to where we are today as an evolutionary component of most of the paths to safer workplaces.  And it is fun to develop an appreciation for historical perspective.